It’s semi-finals day at Inverness Tennis & Squash Club, and after a dramatic set of quarter-finals many of the top seeds are missing.

There’s English interest in all four of today’s matches, with an all-English clash to start followed by challenges from Welsh, Scottish and French opponents.

You can Watch Live, follow on Live Scoring and our Twitter Feed, and we’ll have reports, photos and roundup right here …

There was no Malik magic in the first semi-final session at Inverness Tennis and Squash, as unseeded siblings Torri and Curtis Malik both bowed out at the hands of Grace Gear and Emyr Evans. 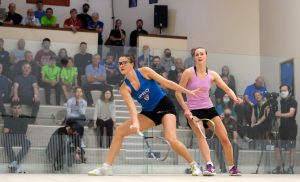 Torrie and Grace were both bidding to reach their first PSA Challenger 10 final, and it was 8th seed Grace who made the better start, taking the opening game 11-2. Torrie has fought back from behind before this week, and did so again as she took a bruising second game 14-12.

Grace was back in charge in the third, regaining the lead 11-6, and led 8-5 and 10-6 in the fourth. Again Torrie fought back, saving four match balls and earning a game ball of her own only to serve out, and it was grace who took the match 13-11 on her sixth match ball. 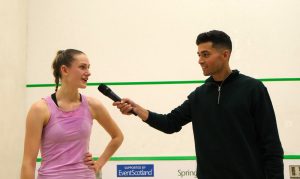 “I’m so happy, this is my first 10k final so really happy to get through that. It was fast and furious for the first two, then she slowed it down in the third but in the end it was back to fast and furious!

“At 10-6 up in the fourth I got a little bit edgy, started to go short way too soon, but I got across the line in the end!” 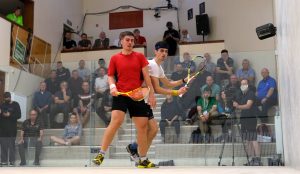 Perry was up against fifth seeded Welshman Emyr Evans (yes, brother of Tesni). The first was nips and tuck, Emry coming from 0-4 down to just edge it 11-9, and was always on top after that, taking the last two games 11-6, 11-4 to reach the final.

“Over the moon! I had two good wins before this, but if someone had said today would be three-love like that I’d have bitten their hand off! I lost 3-2 to Curtis in a tournament just after lockdown, so there was a bit of revenge on the line.

“The first was so crucial, he had a really hard match and such a good win yesterday, so even if he took it I had to make sure the first was tough and long. After that I just grew in confidence, with going short as well, so pretty happy.” 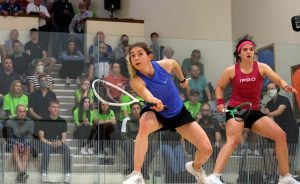 The crowd were treated to a gem of a match in the second women’s semi-final – three hotly contested games that took 48 minutes to complete !

Home favourite Georgia Adderley kept pace with Georgina Kennedy throughout. The first game was full of lengthy rallies, great retrieving, and went point for point until Gina, from 7-8 down, took the last four points to lead 11-8. 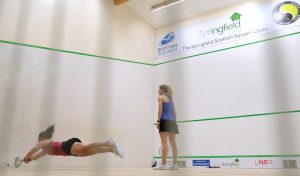 The Englishwoman kept her nose in front for the next two games, but never by much, and not without great skill and determination on both parts. Gina took them 11-5, 11-7 and although the crowd were mostly disappointed with the result they definitely got their money’s worth! 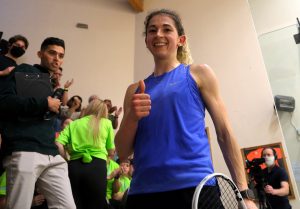 “That was a really tough match, it felt like a 3-2 and each game could have gone either way. Every point was crucial, Georgina’s so good at retrieving I have to work so hard to win every point it makes me feel edgy..

“Really happy to get through that in three but all credit to Georgia.

“I’ve played Grace a few times recently but she’s been playing really well here so it should be a good final.” 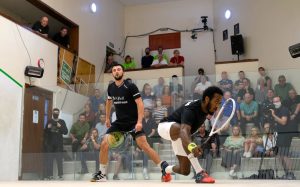 The last spot in the finals was claimed by top seeded Frenchman Sebastien Bonmalais, as he came from a game down to end unseeded Nick Wall’s run.

The opening games were well contested, with a lot of decisions required of the referee, but once the Frenchman had worked it out he controlled the final stages of the match to win 8-11, 11-6, 11-6, 11-3. 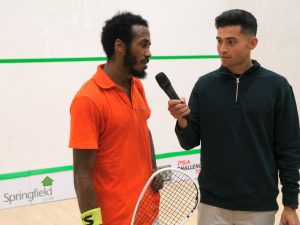 “I’m feeling happy, and proud of how I played today, I knew Nick was a talented player with a lot of skills so I’m happy to win today. When I went a game down I said ok, let’s just stick to the game plan and see how it goes.

“It will be another tough match tomorrow, last time I played Emry I lost 3-2 so I want to take my revenge tomorrow.” 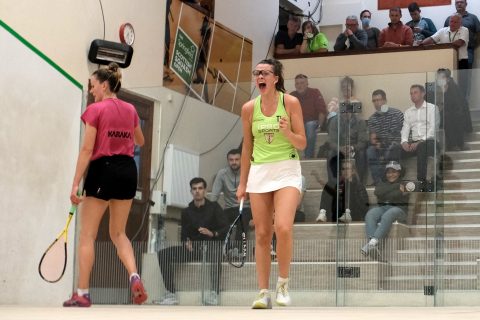